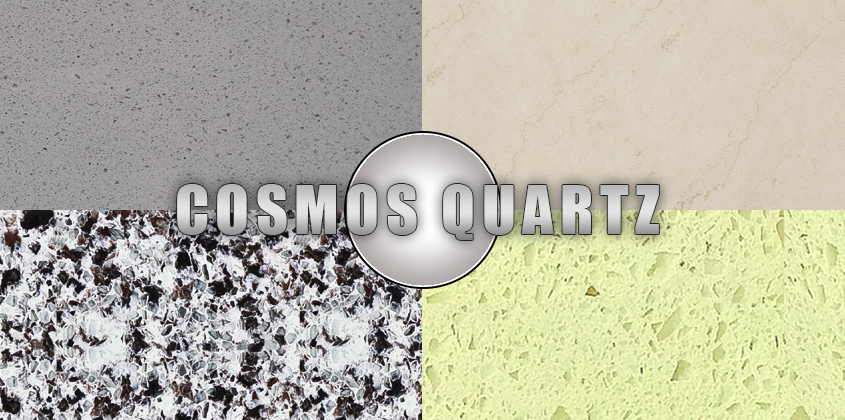 One of the most popular hard surface materials used in homes all over is engineered quartz. One of the brands of quartz available to consumers is Cosmos. Quartz materials such as Cosmos are very desirable and continually are selected to be the material used for all sorts of hard surfaces. In this post, we will consider some basic information about Cosmos Quartz, including what it is, fabricating it, and how to care for it.

The process by which engineered quartz slabs are made consist of mixing certain ingredients together to form a composite. This composite is then formed and the air is removed from the mixture. After that, the mixture is baked at a high temperature and then cooled. The ingredients that are mixed to produce the slab are:

As mentioned, most of the engineered quartz falls within those parameters, but Cosmos might have a mix that varies from that guideline. The best way to determine the exact mix for Cosmos Quartz is to check out the information on the website. And keep in mind, companies are constantly adjusting their recipes and protocols to tune the product.

There are many reasons that people choose quartz to be the material for their surfaces. Kitchen countertops, bathroom vanities, and even shower walls are often times fashioned from quartz. In fact, many online resources make mention of the benefits and/or reasons that quartz (including Cosmos Quartz) is an appealing choice.

And when it comes to popularity, engineered quartz ranks reasonably well in the stone industry. There are a number of things that make it a frequently chosen material. Notice the following quote taken from This Old House.

In the past, the biggest knock against quartz was that it lacked the patterns and color variations you get with natural stone. But that’s a moot point now, with all the manufacturers offering multihued slabs with enough flecks, swirls, and random patterning to make them almost indistinguishable from the real thing.

Quartz in general is really a desirable material and that helps Cosmos Quartz as well. In general, the engineered quartz industry has a variety of benefits that get focused on. However, there are usually specific focus points talked about by each brand or manufacturer. For example, notice the point that Cosmos highlights in its material. On the website Cosmos Quartz

Cosmos engineered Quartz slabs and countertops are available in a wide range of colors, patterns, and even textures. The texture can be fine or coarse, depending on how it is processed, and can be combined with glass and other reflective materials for a sparkling finish.

As we mentioned, quartz surfaces are generally produced following similar processes. The nuances of the process varies, but that doesn’t mean that all are necessarily created equal. There are different grades of quartz just as there are various grades of natural stone. Cosmos Quartz and even other engineered quartz materials though, will promote the following appealing traits:

Like other engineered quartz surfaces, Cosmos no doubt offers variations of the benefits listed above. Additionally, the maintenance and care procedures for Cosmos will be much the same as the other brands of engineered quartz. We will cover some of those care and maintenance practices shortly, be first, let’s take a look at the color selection.

The colors in which Cosmos is available is another reason for its success. After all if a company offers a product and the color palette is not chosen carefully, it could mean another trip to the drawing board to create more colors needed by the consumer. Cosmos has put together the following color selection for the product they offer:

Fabricating Cosmos Quartz brings with it some of the challenges that are common to the quartz material. There are some key things that fabrication professionals need to be aware of if they choose to begin working with Cosmos Quartz – or another brand of quartz for that matter.

Nearly all hard surface materials used in construction projects contain at least some silica. When this material is cut, shaped, or polished, it creates dust. Those dust particles contain silica that can be dangerous if inhaled. So, when working with Cosmos Quartz, it is recommended that quartz fabrication dust collection equipment be used. Having the proper dust collection equipment can keep your working environment as free of respirable silica as possible.

Even after the quartz dust is removed, it could still be a potential hazard. For example, some Cosmos Quartz fabricators are running wet tools that produce a slurry. This slurry is produced when water traps the particles that would become air particulates. The slurry is then processed using a quartz water treatment plant to separate the particles from the water. Then, the water is sent back to the shop where it can be used again to fabricate more Cosmos Quartz surfaces.

Another thing to keep in mind is that not all materials have the same hardness. Because Cosmos Quartz is among the harder materials (quartz is very hard), it requires a diamond bridge saw blade for cutting quartz.

Of course, there are other best practices to follow when fabricating Cosmos Quartz but they are too numerous to mention here. The thing to take away form this post regarding Cosmos Quartz fabrication is that there are specific practices and tooling to consider. There is also some equipment that can be used for both natural stone and Cosmos Quartz

How to Care for Cosmos Quartz

Caring for Cosmos Quartz is likewise a matter for consideration. Maintenance and cleaning processes are fairly standard for virtually all kinds of quartz, including Cosmos Quartz. So what is involved?

Although, Cosmos Quartz does not require sealing after installation, there are occasions that can cause it to need to be sealed. There are quartz sealers that exist for treating materials like Cosmos Quartz should they come to need sealing due to improper care.

How to Clean Cosmos Quartz

Cleaning Cosmos Quartz can be very simple. Since it is stain resistant, cleaning is as simple as using the appropriate quartz cleaning solution and not using harsh chemicals or abrasive scrubbing products. Cleaners designed for use on quartz are generally the correct cleaners to use. We do recommend reading the information provided by Cosmos or whichever brand of surface surface you are considering to see which kinds of cleaners are approved.

As we have seen in this post, Cosmos is a brand that offers benefits. It also has a color palette that distinguishes it from other brands. It is necessary for fabricators to have the proper kinds of equipment and tooling to work with it. And, it can be cared for and maintained using the proper cleaner and stain removers. Hence, there are a number of reasons for taking a close look at this material.