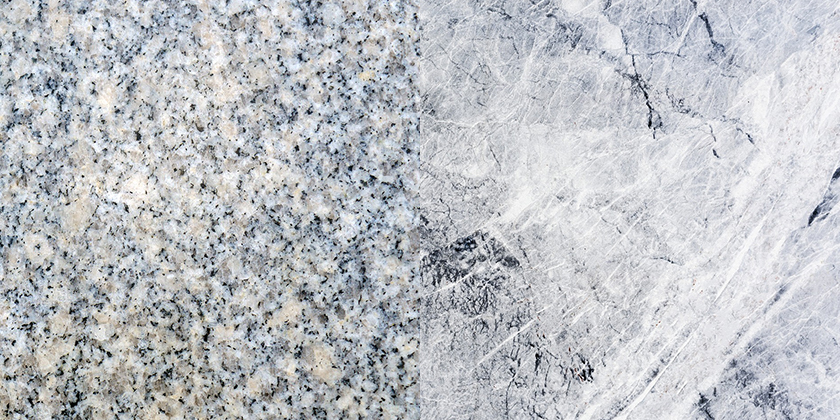 These two stone surfaces look so much alike in name only. In fact, when you look at the materials themselves, these two countertop surface materials could not be further from one another in composition, classification, and appearance.

Even though shops that fabricate them still need to have dust collectors and/or water filtration systems. In this article we will look at these two countertop surface materials and see what makes them different from on another. And even though they are different, we will look at some things they have in common as well in this quartz vs. quartzite comparison.

What Is Quartz Made Of?

Before we can look at the quartz vs. quartzite comparison, we need to understand just what each material is. So let’s answer the question, “What is Quartz made of?” As you may or may not be aware, quartz is a man made material. Additionally, it is composed of multiple materials. Furthermore, some of the substances that comprise quartz surfaces are natural minerals and others are not. Let’s briefly look at what a quartz countertop is composed of.

One material that is in an engineered quartz surface is the mineral after which it is named. That’s right! Engineered quartz contains the mineral quartz. Natural quartz is ground up into various sized particles and mixed with a a second and third substance. One of which is polymer resins and the other pigments to give the surface a color. As a result, the mixture is formed into a slab that is then worked to form a surface. Countertops, worktops, and vanity tops are some of these.

How Much Natural Quartz Is In An Engineered Quartz Countertop?

How much of the natural mineral quartz is contained in a particular brand of countertop varies. It also depends on the formula the company uses to produce the quartz. However, as a general rule quartz companies typically use between 90-90% natural quartz in their countertops. This means that the other 7-10% is made up of polymers and pigments. It is important to state that these percentages are calculated by weight and not by volume. As a result, a large part of the surface area of a quartz countertop is the man made resin material. This offers some benefits and drawbacks that we will get to later in the discussion. now, let’s see what our other material is made of.

Quartzite is a rock the forms naturally in the Earth. It is a metamorphic rock that was once sandstone but then is transformed into a new material through heat and pressure. Like the man made counterpart we just discussed, quartzite contains the mineral quartz. However, quartzite is almost entirely composed of the mineral quartz. Additionally, any other material that is in a given slab of quartzite will be natural minerals too. In fact, any additional minerals will be of a certain type.

As a general rule, quartzite is normally light colored and can even be white. This is because the quartz sand that it is formed from is usually that color. Although other mineral content can make quartzite have other hues and color accents as well.

What Quartzite Is Not

Quartzite is not marble. Why do we say that? Because there has been occasions where stone suppliers sell mislabeled stone as quartzite when it is actually marble. You see, there is a collection of natural stone that is composed of calcite. Calcite, like quartz, is a mineral. However, calcite is a soft mineral that is susceptible to damage that the mineral quartz is not. For example, calcite will dissolve when exposed to acidic liquids but quartz will not. What does this have to do with our topic quartz vs. quartzite? Well in order to compare two materials, one must be certain that the materials being compared are actually what they purport to be. Otherwise our quartz vs. quartzite comparison could easily become a quartz vs. marble instead.

Next we will look at porosity. Quartz is non-porous because it is comprised of polymer resins that are not as porous as natural stone materials. On the other hand, quartzite is porous because it is a natural stone. Polishing helps to reduce the porosity of quartzite but it will still have pores and will need to be periodically sealed using a premium grade impregnating sealer to protect the stone from stains and liquids that might discolor it. So one advantage of quartz compared with quartzite is that quartz does not need to be sealed initially – although there may be situations where a quartz sealer may be used to improve a quartz surface’s appearance.

Another comparison we’ll make in our quartz vs. quartzite discussion is heat resistance. Both of these materials are somewhat heat resistant. However, the natural stone will win this face off since quartz manufacturers always advise using a trivet or a hot pad on quartz. In fact quartz can be burned during the fabrication process if the proper cutting or polishing environment is not used. So the the heat resistance comparison goes to quartzite.

Finally, both surfaces are available in a wide variety of colors and patterns. Yet, the consistency of engineered quartz is higher. Whether that is a plus or a minus will depend on the person buying the countertop. So we will not declare a winner in this area.

There you have it. Two materials whose names make them sound so close to one another but that could not be further apart when it comes to their composition. And as we have seen, when it comes to quartz vs. quartzite, each has advantages. Quartz is a non-porous engineered stone that is scratch and stain resistant. Quartzite is a natural stone that is porous and must be sealed periodically but is heat resistant. Which one you want to choose will no doubt be based on your preference and what characteristics are the most important to you.