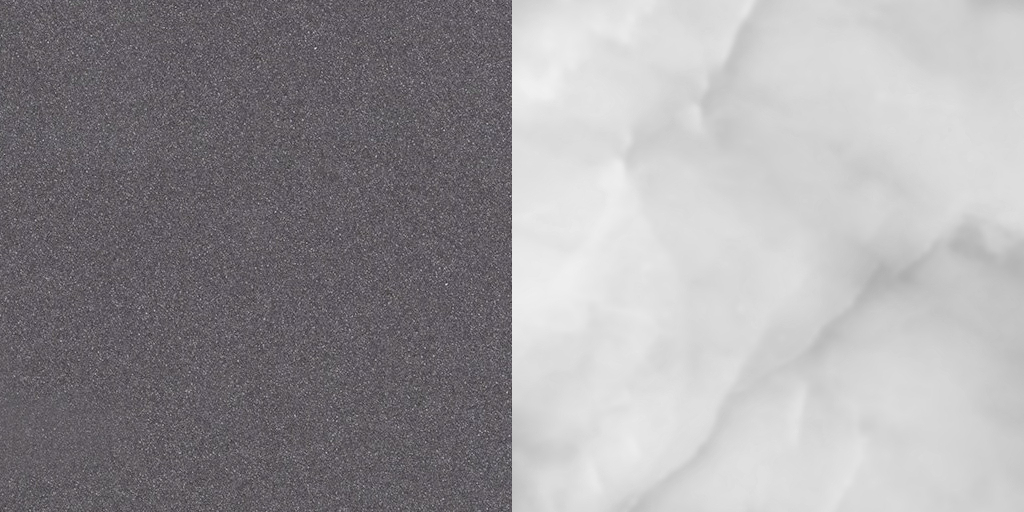 Sintered stone and quartz, that is engineered quartz, not the natural mineral, are both man-made materials. Each material continues to grow in popularity. Yet, each material sports a specific set of characteristics that differentiate it from other materials. In this article we will explore not only the composition of each of these materials, but also their properties. We’ll also delve into comparing the two in our discussion of sintered stone vs quartz.

Composition is one aspect of a countertop material that plays a role is comparing a given material with others. What is in a surface material affects the way it looks, feels, and even performs. So that is where we will begin in our sintered stone vs quartz comparison.

Engineered quartz is produced by a variety of manufacturers. There are dozens, if not hundreds, of brand names under which you will find quartz countertops being sold. There are several brands of engineered quartz, but a few of them include:

You get the idea. The reality is that engineered quartz countertops primarily consist of three main ingredients. They are:

The amount of each of those substances will vary in amount from one brand to the next, but as a general rule, the ratio is; 1) ≅ 90% quartz (by weight), 2) ≅ 10% binder (by weight), and 3) whatever pigment is needed to create the color desired.

So, the above values will differ a bit, depending on the brand of quartz you evaluating, but they basically will follow that basic composition.

Sintered stone is composed of a variety of natural material as well. And, like quartz, each brand has its own proprietary formula it uses in manufacturing. And even though there are fewer brands, they are available in a range of markets. Some of the brands of sintered stone include:

The composition of sintered stone is a bit different from quartz in that it is made up entirely of material found in natural stone. The mineral powder quantities vary from brand to brand and so does the combination of forces used to do the sintering. By combining heat, pressure, electricity, and perhaps other forces, the raw material power can be transformed into a new material through metamorphosis (the process that naturally turns on rock into another). For more information about this material, check out the article entitled: Sintered Stone where we go deeper into the subject.

Being made up of the mineral quartz and polymeric resins, quartz surfaces have some properties that make them appealing. One is the fact that they are hard. The hardness of a surface is what makes it resistant to scratching. Scratch resistance is important to consumers that use quartz in kitchens as countertops or in other areas as worktops. It is noteworthy though, that the hardness of quartz means it must be cut with a blade made for cutting hard materials.

Porosity is another property that purchasers put at the top of their list of valuable traits. Porosity is directly related to staining potential. If liquids are able to get into the pores of a material, staining can occur. However, quartz has no pores because of its composition. The quartz and the resin that make up virtually all of the material are both non-porous.

The Properties of Sintered Stone

Sintered stone is a formidable competitor in a match up of sintered stone vs quartz. The reason for this is that the properties of hardness and porosity which we talked about in the previous section are also true regarding sintered stone.

Sintered stone is extremely hard and therefore scratch resistant. Like quartz surfaces, sintered stone countertops take specific tools to fabricate them. For example, you will need a blade designed for cutting very hard materials. Porcelain blades are made for that task and in many cases they can be used as blades for cutting sintered stone. It also is non-porous like its counterpart. At this point in the discussion, you might be thinking, “these materials are basically the same”.

Comparing the composition of quartz vs that of sintered stone and measuring the similarities and differences between their properties is interesting. But how does all of that translate into a match up of sintered stone vs quartz countertops? Well, we will briefly consider how these materials perform as countertops.

Quartz countertops are relatively easy to care for since they are non-porous and scratch resistant. The non-porous nature of the material does get surface stains that must be removed. As a general rule, the resins used to bind the quartz together respond well to cleaners that are acidic. So they do not have to be cleaned using only a pH neutral cleaner. Their hardness makes them scratch resistant and this is good for kitchen countertops since eating, cooking, and serving utensils can scratch some other countertop surfaces. For these reasons, quartz proves to be a desirable material to many consumers.

Sintered stone materials offer many of the same benefits as engineered quartz. as we have discussed, they too are a very hard and scratch-resistant. In fact one brand of sintered stone surface advertises that its material can be cut on directly and no cutting board is needed. The same brand touts there is no need for hot pads or trivets. These messages convey the idea that the surface is very durable against heat and scratching. As far as stains are concerned, sintered stone can be cleaned using all sorts of cleaners including:

Each of the types of cleaners mentioned above works well on certain kinds of stains or substances that can dry on the surface. Depending on the kind of stain, certain cleaners may work better. You can research cleaning products for sintered materials.

The porous natural of sintered stone ensures that whatever type of stain the material encounters, it will stay on the surface. This means that cleaning the material will always occur on the surface and not require any kind of penetrating cleaner.

In conclusion, both sintered stone and engineered quartz have strong points when it comes to all three of the areas we looked at. Namely, composition, properties, and application as countertop materials. However, as we have explained in this article, they are different materials even though each is man-made and must be treated uniquely. If you decide to add either of these surfaces to your list of countertop materials, it is good to know what the strengths are of each. Whether a customer chooses to go with sintered stone vs quartz will depend on their preference and/or the color choices available.